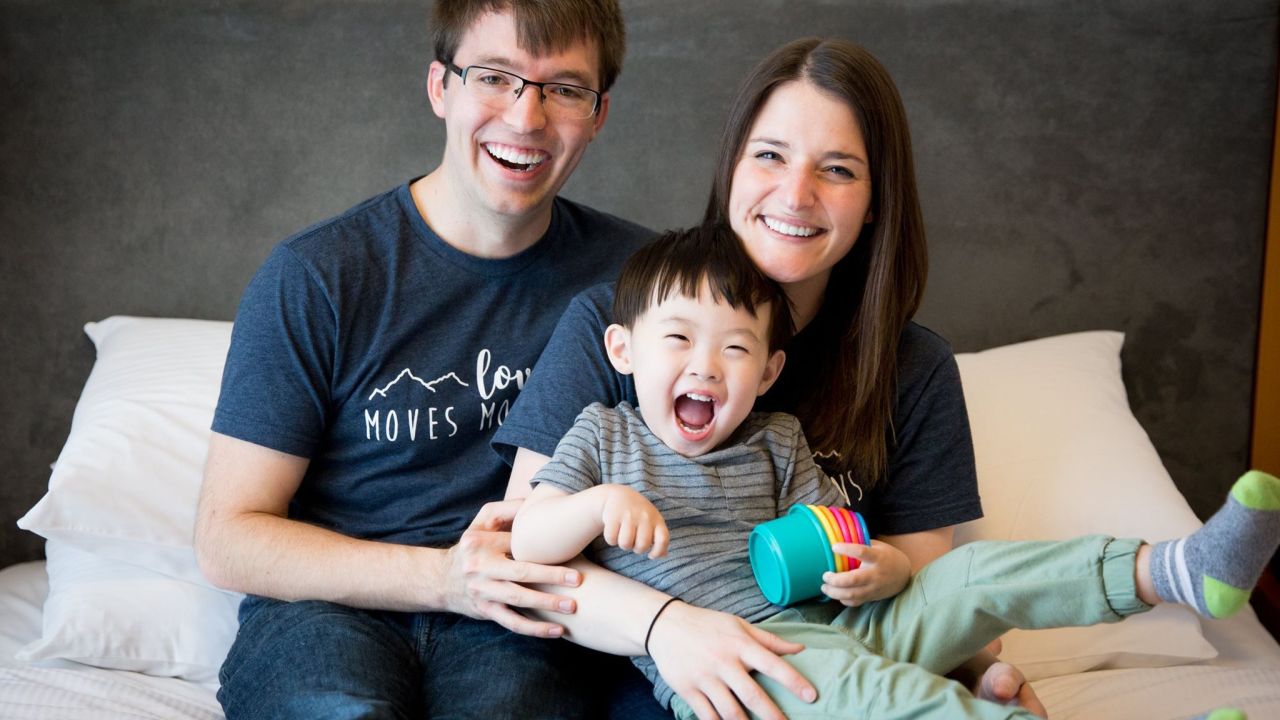 As a child, Callie Troyer imagined God's “peace which surpasses all understanding” would feel like a warm, fuzzy blanket. However, as she and her husband traveled along the difficult road of international adoption, she came to know that peace personally. Better than a blanket, it was a deep, guttural assurance that they were exactly where God wanted them to be.

Callie and Ryan Troyer were married in 2013. Having been friends for many years, they knew of each other’s mutual heart for orphans and vulnerable children and hoped to one day add to their family through adoption. But what was at first their plan ‘b’ suddenly became plan ‘a’, when a little boy, halfway around the world changed their hearts.

“We sponsored a little boy named Gideon, through a program called Love Without Borders,” Called shared. “We enjoyed receiving updates on him and followed his progress closely for about a year. One day, though, we received an email saying he had passed away unexpectedly from a respiratory infection. While we had never met Gideon, we took the news of his death extremely hard. God really used that time to lead us to adoption as the first path for growing our family.”

At that time, Callie and Ryan were only twenty-three years old, two years too young to file for adoption in most countries. Undeterred, they used those years to prepare their hearts, minds, and home for an adopted child.

After celebrating their 25th birthdays, the Troyer’s began their home study paperwork. They were told it would take three to six months to be matched after their home study. However, the very day their home study was completed, they received an email from their case worker. There was a little boy in South Korea she wanted them to see.

“She said, ‘I just have this gut feeling. I think you should see his file.’ She sent me his picture and when Ryan and I saw him we knew: that’s Gideon,” said Callie.

Gideon, named after the boy who had so tangibly impacted the Troyer’s hearts, was labeled as an “unassigned referral”. This meant, despite being over twelve months old, he had not yet been matched with a family. Seeing no red flags in his file, the Troyers said ‘yes’ to Gideon and began the process of bringing him home.

“We were matched with Gideon in May of 2017. In July, we got an email from our agency saying there had been a development in his case. They sent us some videos and asked us to call them after we watched them. As we watched, we immediately saw their concerns. He was meeting about six of twenty-five milestones for his age. At almost 19 months old he was not walking or talking. They asked if we wanted to move forward and after we prayed, we agreed he was our son and we would continue the adoption process,” Callie said.

The news in July was quickly followed by yet another difficult email in August. Gideon’s foster family reported he was no longer making eye contact, responding to his name, or showing any spontaneous affection. Believing Gideon to have autism, the agency met with the Troyers once again. They discussed the possible diagnosis and asked, for a third time, if they wanted to move forward.

“We met with our social worker again because we had to sign a form acknowledging Gideon was not walking or talking at his age. I’ll never forget what she said: 'I need you to understand that Korea doesn’t just want to know that you know about his delays. What they are really asking is if you will still love him even if he never walks or talks for the rest of his life.’ At that moment, we realized we were taking a big step forward. Again, we prayed and had this deep, gut feeling we were exactly where God wanted us,” Callie remembered.

Over the next several months, Callie and Ryan continued to wade through paperwork and plan ahead for Gideon's needs. The Troyers had saved for the two years leading up to their adoption, however, the processing fees and unexpected medical expenses were still more than they could afford. They ultimately found Joseph's DreamCoat, a ministry of Orphan Outreach which awards adoption assistance grants to Christian families adopting internationally.

“We really enjoyed working with Orphan Outreach throughout the application process,” Callie shared. “You always kept us updated on where we were in the evaluation process. You ensured you had the most up-to-date information on our case. We really appreciated all of the thought and effort that went into it and how you took the time to get to know us and our situation personally.”

A few weeks before Callie and Ryan were to meet Gideon for the first time, they received a call from Orphan Outreach. They had been chosen to receive the grant! Feeling a mixture of gratitude and relief, Callie pulled over in a Walgreens parking lot and cried at the news.

“Receiving that grant meant more to our family than we'll ever be able to say. Our friends and family were so supportive during that time; but there were definitely emails sent in the middle of the night to our social worker, where I would ask, “Are we crazy? This is crazy!” Parenting a special needs child was not something we had envisioned for our life. Receiving the grant felt like having your whole organization in our corner, rooting for our family.” Callie expressed.

Gideon has been home for a little over a year now and is thriving.

“He is an amazing, brave little boy,” smiled Callie. “ He has so much joy for life and the people around him. As crazy as the process was, as many surprises as we had, I can one-hundred percent say adopting Gideon was the best ‘yes’ we’ve ever said.”

If you would like to help families like the Troyer’s afford their adoption, consider donating to Joseph’s DreamCoat.

back Because Orphan Care Doesn't End When Orphans Age Out Our foundation is strong. The future is bright because God is still the author. next