Sponsorship Leads to Friendship in Guatemala 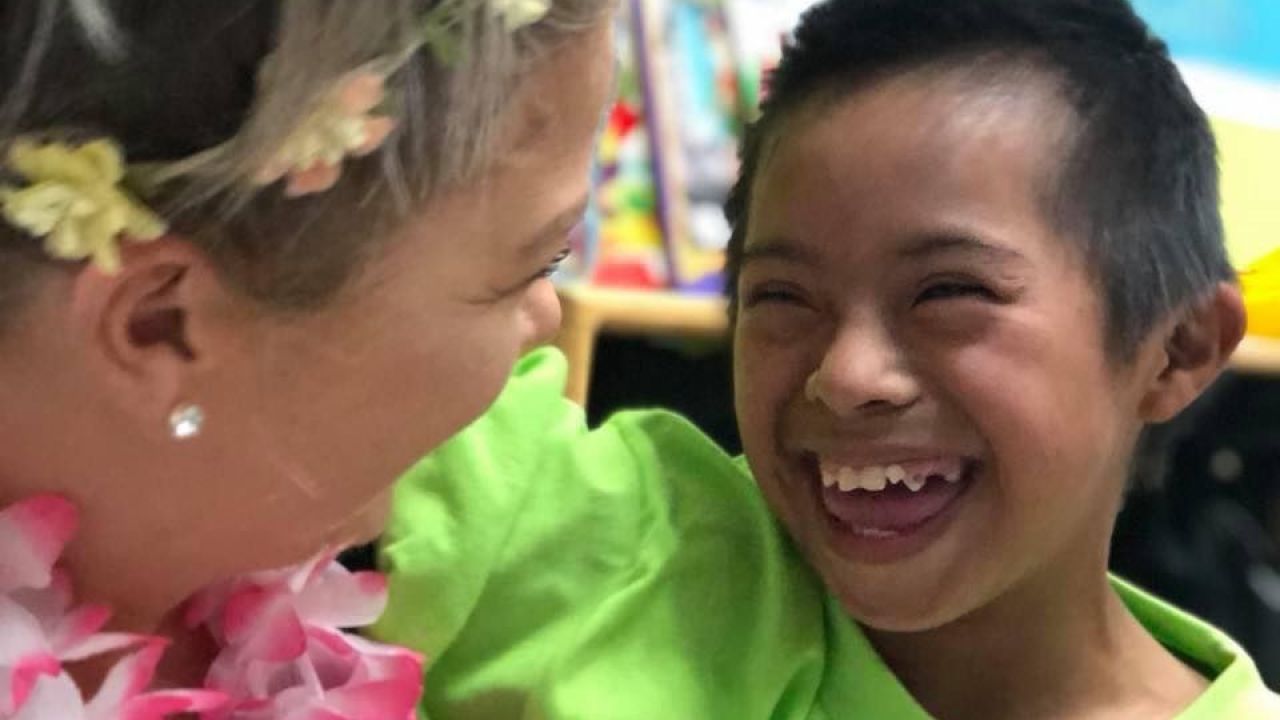 As soon as Sarah Winfree stepped foot in the Down Syndrome School in Guatemala City, all she could think about was meeting her sponsor child.She had spent a lot of time praying for 6-year-old Franklyn and writing him letters. His pictures hung in her home in Ohio. Even though she hadn’t even met him yet, she loved him like her own child.That’s why, when she was given the task of overseeing the party that her group was throwing for the children, she was hesitant. She knew it wouldn’t give her the freedom to hang out with her sponsor kid.“The other people on my mission team kept telling me they saw Franklyn, but I was busy running around and it was killing me, because I just had to see this kid,” Sarah says. “Finally, when I was done organizing, I started looking for him.“My eyes were scanning everywhere, trying to find him until, finally, over in the corner of the courtyard, I see this kid with his face painted completely green and a painted mustache. He was spinning around and screaming at the top of his lungs.” It was the perfect introduction to the spunky, high-energy boy. Winfree was overjoyed.“I just felt so privileged because I know that a lot of people don’t ever get to meet the child they sponsor,” she says.She introduced herself and pulled out the gift bag she had put together for him. Orphan Outreach had sent her information about Franklyn, so she knew exactly what he liked: firemen.Sarah has a friend who is a fireman, and he gathered some special gifts for him.“He sent Franklyn a fireman hat and badge, and Franklyn’s eyes just lit up when he saw it. I wish I had a video of that moment! He was so excited. He could have cared less about all of the school supplies and other things that I brought him. He just loved his fireman stuff. It was so funny.”

Before Franklyn, Sarah had sponsored another boy in Guatemala for two years, but when that child was no longer available, she started her journey to find a new child in need.

“I wanted to sponsor wherever it was most needed within Guatemala, so I asked the staff at Orphan Outreach and they directed me to the children benefiting from the Guatemalan Association of Downs Syndrome. When I scrolled through the pictures of children, I saw a tiny boy with pointy and missing teeth and I was like, ‘that’s my kid!’”

Winfree, now in her early 30s, has been sponsoring 9-year-old Franklyn for a little over three years. She likes to go back to Guatemala as often as she can to see how her friends are doing and to check on Franklyn. She has been on a total of six trips to Guatemala and also went once to Kenya.

“I want them to know that I haven’t forgotten about them and I want to continue to build on those relationships, she says. “All these years that I’ve been coming to Guatemala, they just mix together and it seems like something I’ve done my entire life,” she says.

When Sarah started sponsoring, she didn’t make a lot of money and the $36 a month was a bit of a sacrifice, but it was something she wanted to do.

“A lot of times, people see $36 a month and think, I can’t afford that. But, yes, you can,” she says. “Just skip a meal eating out like once a week or give up your expensive coffee.”

The sponsorship money that Sarah sends Franklyn, helps make his education possible. The

teaches its students about self-care, hygiene and basic life skills. It also ensures that they are able to learn about the Bible and do fun activities to help them grow spiritually. The sponsorship money also funds the children’s transportation to and from school, which is hugely beneficial, especially when they are being raised by families struggling to provide for their children.

“A while ago, Franklyn was in an accident and the sponsorship helped cover the cost of his physical therapy and medical bills. Besides that, it’s a great witnessing tool for the parents (in cases where the child is not an orphan) and for the community.

“Sometimes, people who are considering sponsorship, think that the money goes to cover the child’s schooling, but it’s so much more than that. You are helping these kids have a future and help break the cycle of poverty.

“It is completely worth it,” Winfree says. “I don’t think people realize how powerful sponsorship really is. At one point, I didn’t. But I’ve seen what it does first-hand.”

You can be the ONE to say, "I've got you, kid!" Join Sarah and sponsor a child today. Get all the details here!

back Adoption into God's Family - The Power of Sponsorship Our foundation is strong. The future is bright because God is still the author. next