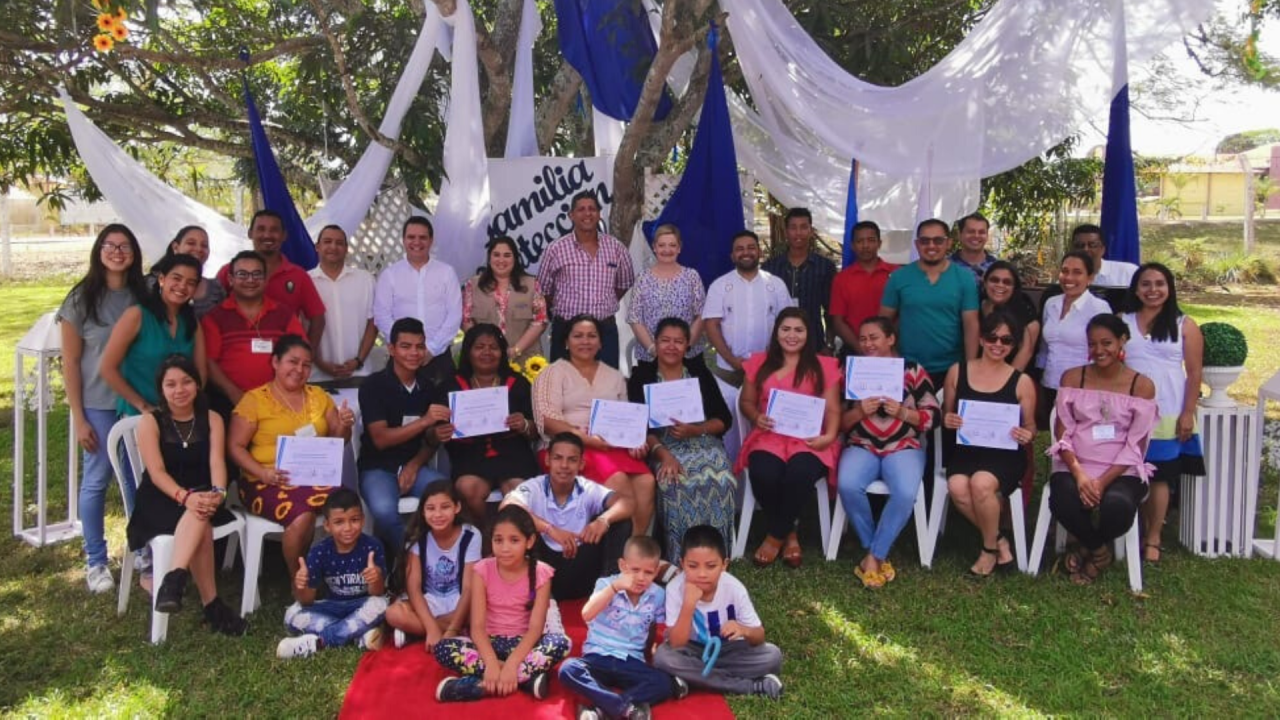 The road to change is long and winding, yet it is not without its milestones. These moments in time are worth recognizing and celebrating. Last month, Orphan Outreach’s Honduran NGO, Asociación Manos Extendidas (AME) shared in the celebration of  a very big milestone indeed: the graduation of the very first cohort of families trained for foster care.

Austin South, Orphan Outreach’s Latin America Regional Director, and Francisco Campos, the Executive Director of AME, along with their staff and their counterparts in the Honduran Government have been working tirelessly for the last six months, preparing to launch this training.

“Taking these first nine families through an entire training signified a culmination of so much work.  Over the last several years, God has been setting up dominoes and now we are watching them fall into place,” said Austin.

Those dominos were laid as far back as 2015 when the Honduran government first reached out to AME. At the time, they wanted help creating the policies and procedures for a national foster care system. Those laws were established in 2018. Since then, the focus has turned to taking the work from paper to practice, and the results have been deeply encouraging.

“The current president created DINAF (similar to Child Protective Services in the US) when he came into office in 2013. Before that, there had never been a codified functional foster care program. Essentially, DINAF started with nothing. Through their effort and determination, combined with our support and resources, we are seeing a foster care system emerge that is largely unmatched within the region,” Austin explained.

While AME has been deeply involved in the development of the foster care program, it will not be responsible for running it. Instead, their role is one of support, helping the various entities put the puzzle pieces together.

Foster care will be a privatized system in Honduras, outsourced to private NGOs. These nonprofits will be the ones to recruit families and provide case management and follow up once DINAF places children within those families. This allows DINAF to regulate the system and ensure compliance.

Family Life Mission is one of the two partnering NGOs, the other being Identity Mission. Over the last two years, they have sent out foster care “promoters” into the community in hopes of finding families who are willing to foster. As a Christian organization, they focused their efforts on the church, traveling to a variety of congregations around the city of Catacamas. They spoke about the need for foster families and the responsibility of the Church to take care of orphans. Their work was effective and they had a large number of families come forward to serve. Through a series of filters and evaluations, Family Life Mission settled on nine families to launch as the first foster families under the new set of regulations.

The law requires each family to go through initial training as a part of their licensure. The AME-DINAF team took the lead in designing and facilitating the twenty-one-hour training that fulfilled this requirement.

“The whole team worked very hard to get this three-day training going in a very professional manner. It was designed to be very interactive, full of games and activities. When we started the training, we had brand new families with a very basic idea of foster care. By the end of the training, we had a strong group of families with a solid context of foster care and what it would take to provide a high level of care for these kids,” Francisco explained. While the families ranged in age and life stage, they had a great deal in common. They all came from areas surrounding Catacamas, they all attended church, and they all fell within the upper end of the lower socioeconomic bracket.

Francisco and his team are thrilled with the outcome of this first training, but they are already looking ahead to the next group of families.

“We hope to train as many families as we can,” Francisco said. “However, we see this being a slow process to start.  We are more concerned with developing the skill sets needed to make this a long-term success. That said, our goal in the first two years is to train sixty-four families and I think we will reach that goal earlier.”

At this point, each family will be matched with a single child unless there is a sibling group. All of the children placed will be between the ages of newborn and five and have “basic” profiles. Of course, as the foster care system matures, older children with more complicated needs will be placed with families who can provide for them properly.

All nine families have received their diplomas for going through the twenty-one-hours of training. Now they are but one step away from being licensed, with only a few forms left to file. If all goes according to plan, the first child will be placed in the care of their foster family during the first week of March. The training and support don’t stop there, however.

“The system is designed to surround the families with several different forms of support,”  Francisco shared. “In our minds, this first training is good for the first two-to-three months of placement. It sets the family up to provide good care for the child, walk them through the initial stages of adaptation, helping the child grieve as they are adjusting to their new environment. But the family will continue to receive training at least every two months. The families also know they can go to the NGOs for support pretty much 24/7.” In addition to continual training the program is designed with close and constant case management and follow-up.

The graduation of these nine families is but one milestone on Honduras’ journey towards a national foster care program. The impact of each step, however, goes well beyond these first few families.

“I think the big picture of this work is seeing generations transformed. It’s giving these kids, and every child after them, a different destiny. The scope of what this foster care system will accomplish is bigger than any of us,” said Francisco.

AME needs your support in order to continue their life-changing work. Donate now!

back So, what's your 'something'? God is working in Russia. next