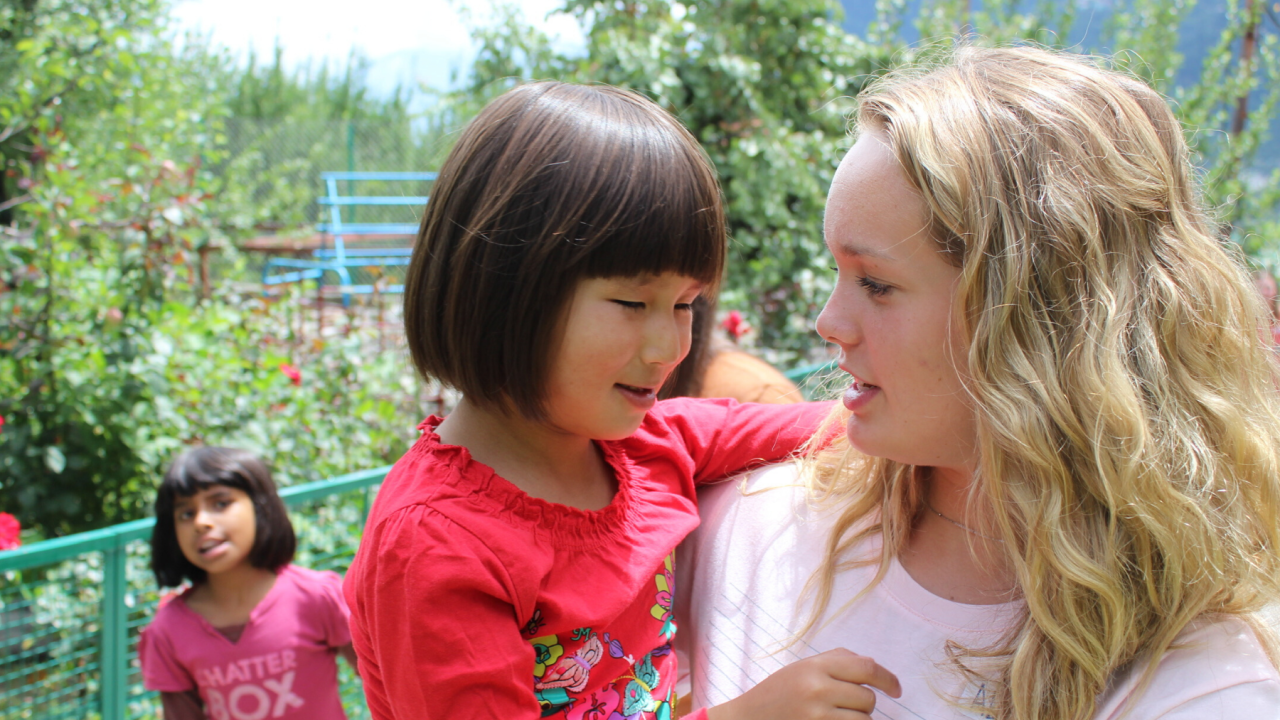 Hanging on a bulletin board, over a desk overflowing with textbooks, is a colorful drawing of two perfectly imperfect stick figures. It’s a child’s sweet offering to a friend, a mentor, living halfway around the world and her sweet reminder of the eight-day-trip that brought them together.

The picture was drawn for Allison Skelton, a sophomore at Abilene Christian University (ACU). In July of 2019, Allison traveled with Orphan Outreach to Dar-UI-Fazl Children's Home in India, where she met six-year-old Lany*.

Allison first learned about the trip through ACU’s Mission Center. The Mission Center provides summer ministry trips for its students, offering a wide variety of locations and services.

“The way the missions center does it is they put all the locations online and then there’s a very, very brief description of the trip and that’s really all you know before you apply for the trip,” said Allison. “India sounded really cool and that was the initial draw for me. I had never been anywhere like that before. Then I saw that the description said it would be a relational ministry trip, working with orphans, and that sealed the deal. I’ve always loved working with kids. So, I applied and was accepted and that July I traveled with seven other ACU students and our trip leader, Ronne Rock, to Dar-UI-Fazl.

Allison’s team spent eight days with the children living in the home. Each morning they led a short devotional and the rest of the day was spent simply getting to know the kids and experiencing their daily routines alongside them.

“One of the main goals we had as a team was to get to know the kids individually and spend time with them. The orphanage is an incredible place. It’s so well run and the way the staff loves and cares for those kids astounded me.” The team traveled to the home during a special vacation week for the children, and the days were filled with opportunity. “We wanted to make sure they felt seen,” Allison explained. Over the course of the week, Allison developed a very close relationship with a little girl named Lany. Eager to continue that relationship, Allison registered with Orphan Outreach to become Lany’s sponsor soon after returning home. Over the next few months, Allison did whatever she could to intentionally pour into Lany the way she had in India. She did so by writing letters.

“Writing to Lany is like being able to pull her aside and have an individual conversation with her again,” Allison expressed, “It’s not as good as talking to her in person but it’s the best that I can do. I made a commitment to support her, not only financially, but emotionally as well. I committed to supporting her heart and helping her grow. So, anything I can do to help her feel more confident in herself, more loved, more thought of, I want to do.”

In her letters, Allison likes to remind Lany of the fun things they did together during her trip last summer. She also include things that might interest and encourage her young heart.

“Because she’s really little, I like to make my letters fun and entertaining. I tell her a little bit of what I’ve been doing since the trip and what my school is like. I know some of the older kids at the home attend high school and college, and they come back and tell her about it, so, I try to do the same thing. I just share really simple things I think she’ll be interested in. I don’t really get too deep or ask her too many questions because she’s still pretty little,” Allison said.

For Allison, writing to Lany is more important than receiving a response; though, she certainly has enjoyed the response she has received so far.

“Usually, it’s just me writing to her, but I have received one letter back,” Allsion shared, smiling. “It was very short, mostly saying she loved me and thanking me for the letters. She said she missed me and she drew a sweet little picture of the two of us together. It was really cute! So, I know she’s getting my letters and reading them and that is what is most important to me.”

Allison admits that letter writing doesn’t always feel glamorous or even that impactful. Sharing simple details about yourself or asking simple questions of your child may seem unlikely to make an impact on them, but Allison is certain it matters a great deal.

“I would encourage anyone who isn’t currently writing their sponsor child to just sit down and tell the most basic things about yourself: where you’re from, what the weather’s like, what you do in a day, what your favorite thing to eat is, what your favorite color is. Kids hang onto things like that! They will remember those details and they bring them up in future letters. You wouldn't think my favorite color is a big deal to Lany, but if she made me a bracelet while I was there, it was in my favorite color. If she brought me a crayon, or a marker, or paint it was always my favorite color. Whatever you decide to share, no matter how basic, it’s one step closer to getting to know them on a deeper level and that’s what it’s all about,” said Allison.

Allison hopes to keep her relationship with Lany growing by visiting her again this summer. She has currently applied for the same Orphan Outreach trip offered by ACU and is waiting to hear if she has been accepted.

“Ronne is leading the trip again and they’ve opened up more spots than we had last year. I’m hoping the people who went last year will get to join some new people and make a bigger group. More participants means more love for more kids, so that would be incredible,” Allison shared.

Are you ready to meet your sponsor child? There are kids around the world ready for your encouragement and support. Meet them now.

*The name has been changed.

back Bless the work of our hands... Our foundation is strong. The future is bright because God is still the author. next