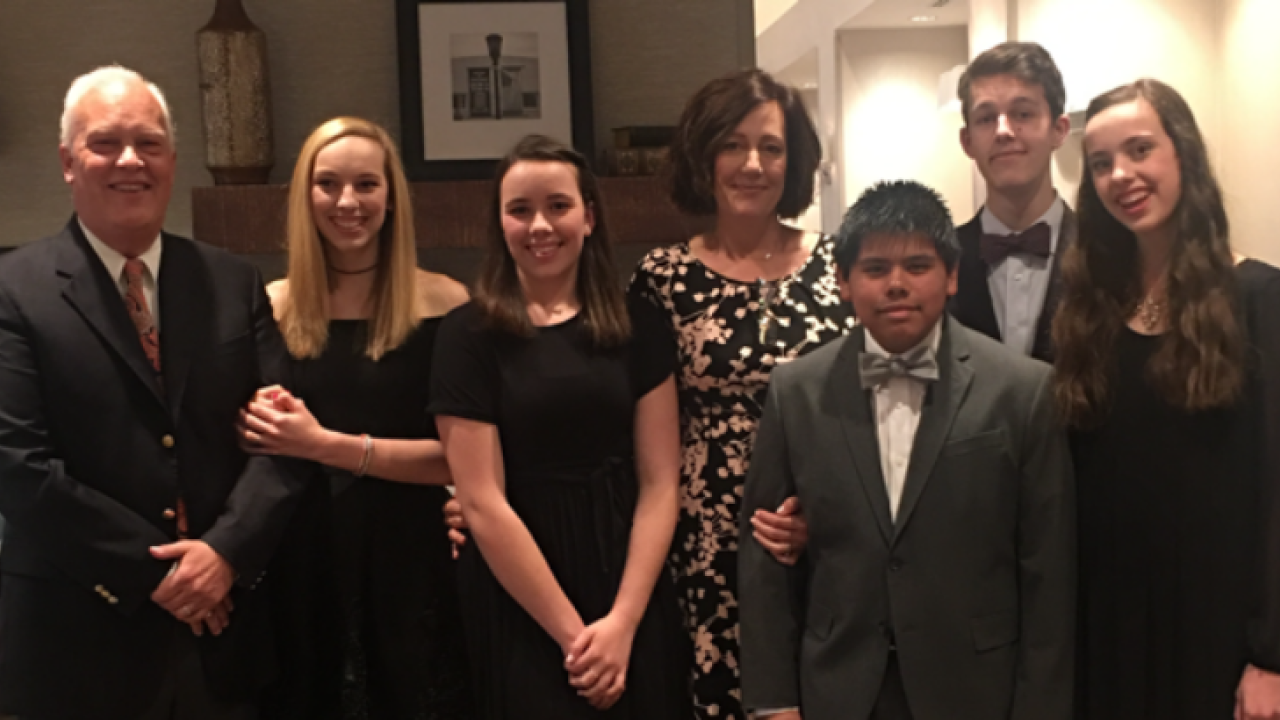 On August 21, 2020, Jennifer and Jay Kassing learned they had been chosen as “Angels in Adoption” Honorees. This award, presented by the Congressional Coalition on Adoption Institute(CCAI), seeks to spotlight individuals like the Kassings, who are doing extraordinary work within the world of foster care and adoption. For the Kassings and Orphan Outreach, it is an opportunity to celebrate all that God had done through the ministry He birthed in them eighteen years ago called Joseph’s DreamCoat.

“It all started when we felt a nudging to expand our family through adoption. We already had four biological children and had never considered adoption before, but we knew the Lord was calling us to adopt,” Jennifer explained.

The Kassing family decided to adopt from Guatemala and soon brought home their son, Joseph Edgar Thomas, whom they affectionately call Jet. As their family adjusted to their newest addition, Jennifer began to feel another nudge.

“Within a year of bringing Joseph home, Jennifer was ready to adopt again,” Jay remembered. “But at that time, Guatemala was closing their adoption program down and we realized, you know, we have five kids, we have a responsibility to the family we already have. But we knew there were other couples wanting to adopt and we wondered if we could help them.”

International adoptions can cost anywhere from $15-$50,000, creating a formidable barrier for families wishing to adopt. The Kassings began to dream of a way they could help ease that burden, and in 2005, they launched Joseph’s DreamCoat, an adoption financial assistance program.

“It was really a kitchen table ministry,” Jennifer said. “Jay had a full-time job, I was busy with five small kids, and nothing was automated. We were going to Kinko’s to make copies, we personally called every reference, and we wrote checks by hand at the kitchen table! We had no idea what we were doing, we just knew there were children who needed homes and families who wanted to be that home, so we just kept marching.”

“What kept us going,” shared Jay,“were the amazing families adopting these children. Our part was small in comparison to what they were doing. Many of them were adopting sibling groups, special needs children, or children with Leukemia or HIV. It was incredibly humbling to support them.”

What began with one or two adoption grants a year grew to nearly forty, and the Kassings knew they needed a partner to meet the ever-increasing need.

“I had done some mission work with Orphan Outreach in years prior and had come to know the team fairly well,” Jennifer shared.“I decided to call Tiffany Taylor Wines (Vice President of Development for Orphan Outreach), hoping she might have some wisdom on ways we could streamline everything, to make it more manageable for the two of us. I told her our problem and she said,‘Let me think about it.’ A few weeks later, she called and said, ‘Our president and I would love to talk to you and Jay’ and we thought,‘Great! They must have some way to put everything on the computer.’

“When we got on the call, however, they shared their heart with us and they asked if we would consider rolling Joseph’s DreamCoat under Orphan Outreach’s umbrella. We were blown away. From the very beginning, we knew this was not our work. This was God’s work. And we knew if Orphan Outreach was going to take it over, they would do infinitely more with it than we ever could at our kitchen table.”

Jennifer and Jay continue to be deeply involved in the ministry, serving on the board and shepherding families through the adoption process. As they reflect on the honor of receiving the “Angels in Adoption” award, it is really the families they have served that come to mind.

“The real stars of the story are these adoptive parents,” shared Jay. “Because once you bring the children home, there’s work to do. So many of them have a long, hard, fabulous road ahead of them. They’re the ones that should be getting the awards because they’re the ones who are providing all the love and attention these children deserve.”

Ninety-four awardees from 42 states were honored along with the Kassings at the 2020 “Angels in Adoption” Gala. While the events traditionally unfold over the course of three days in Washington, DC, COVID-19 moved the festivities online this year. The change in location didn’t dampen the honor, however.

“To be a part of this has really been nothing short of a joy and we could not be more pleased,” Jennifer said. “To be honored for something we started in celebration of our son, Joseph, it’s really kind of mind-blowing. And to think back on the children who have found their families, just as we found Joseph, is really quite something. To God be the glory.”

While COVID-19 has put a temporary halt to international adoptions, the opportunity continues to use Joseph’s DreamCoat to bring children home to their forever families, this time, in Kenya.

“In Kenya, there are families just waiting to be able to pay the legal expenses in order to finalize their adoption,” explained Amy Norton, Orphan Outreach Vice President of Strategic Partnerships. “Those fees are a small amount compared to the financial need some families have here in the U.S., but that means a small amount of support can have quite the impact in creating forever families. It’s a blessing to extend this grant to Kenya and we’re eager to offer it in other countries, as well.”

Norton was involved in submitting Jennifer and Jay’s name to U.S. Congressman Collin Allred(the Kassing’s State Representative) and was overjoyed to hear that the Congressman had nominated them to receive the honor.

“We are so blessed that Jennifer and Jay allowed us at Orphan Outreach to be a part of their amazing work.  We are very excited for them to be honored and to celebrate everything they have done to help create forever families for so many children, not only here in the U.S., but for international families, as well.”

Would you like to be a part of the growing impact of Joseph’s DreamCoat? Donate today and help us unite children with their forever families.

back The Impact of Family Preservation Our foundation is strong. The future is bright because God is still the author. next