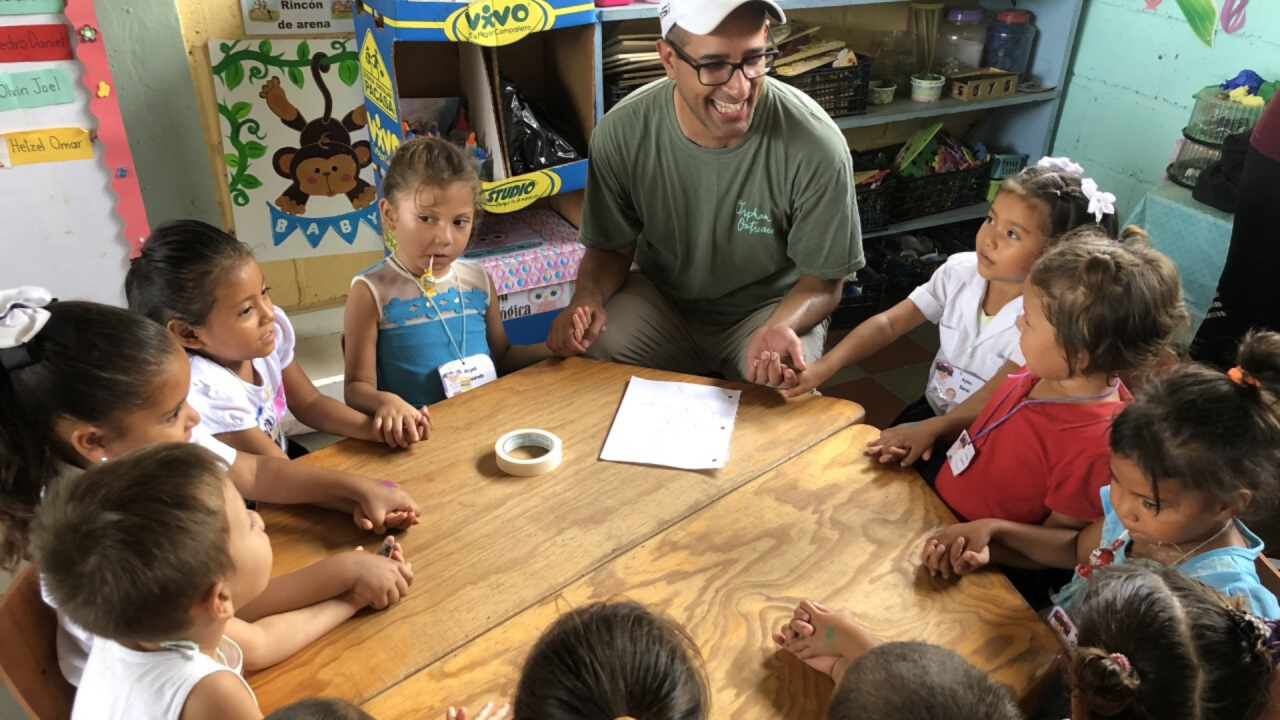 Every staff member at Orphan Outreach has a “why” behind their work. It may be a moment, a child, or a personal experience, something that drives their desire to serve orphaned and vulnerable children around the world.

Rey Diaz, Orphan Outreach’s Executive Vice-President and Chief Operating Officer, found his “why” on the streets of Honduras several years ago.

“Before I came to Orphan Outreach, I was pastoring a church that I loved,” Rey said. “It was a great job at a great church that was very mission-focused.”  At the same time Rey noted that something was missing after spending 5 years working the most vulnerable in Honduras.  He was wrestling between serving where God has planted him, and where he felt he could be of greatest impact.  During that time, while attempting to discern God’s direction, Rey and his family were sent on a short-term mission trip to Honduras.

“I remember we were staying in an old house,” said Rey. “And one morning, my son, who was three at the time, put his full weight on a ceramic sink. It apparently wasn’t on the wall well, because the whole thing fell over and shattered. When I heard the crash I ran over and found him on the floor. He was cut up everywhere, it was a bloody mess...it was really scary. We got him to a doctor and it ended up being nothing at all. He got a few stitches in a couple of places but nothing major. Still, it was a very, very emotional experience. I remember carrying him, and him crying. It was his first time getting stitches and you just feel for him because you love them!”

Shaken and emotionally drained, Rey got his son settled at home and decided to go for a walk to decompress. The streets he walked were busy, filled with cars and people milling around. As he wandered, he spotted a little girl playing a very dangerous game.

“I saw this little girl about my son’s age, maybe three or four, and I noticed that she was hiding and waiting for cars to drive by. Then, just as one was going by her, she jumped out in front of it, I guess trying to scare the driver or make them swerve.”

Rey immediately ran over to the girl and grabbed her up.

“I looked at her and said, ‘Hey, you can’t do that! You’re going to get hurt this way!’  Then I asked where her parents were. She told me her mother had moved to the United States and that she had never known her father. So I said, ‘Who’s watching you, then?’”

The little girl pointed down the street, her gaze resting on another young girl, her sister.

“I see who she is pointing to and it’s an eight-year-old girl. So, I walked her down to her sister and I asked, ‘Who’s taking care of you?’ She told me her aunt was caring for them, but she works all day. I was already exhausted from my son’s accident and didn’t know what else I could do, so I looked them both in the eye and said, ‘OK, well, listen, quit jumping in front of cars. It’s dangerous!’”

The girls nodded their assent and Rey continued on his walk, heart heavy and mind swirling.

“As I walked away, I was thinking, ‘Man, these little girls are orphans and if they had an accident like my son, who’s gonna take them to the hospital? Who’s gonna take care of them? Who’s gonna wipe up their tears?” and I just sensed God say to me, “That’s what I’ve called you to do. That’s what Orphan Outreach is doing and it’s what I want you to do. You’re there because these kids don’t have the family they need. They don’t have people to love on them. They need a father,’” Rey shared.

“It’s not really a victory story because I don’t know what happened to those girls, I never saw them again. But that story has always stuck with me because it is a reminder that God loves His children and He has called us to this work.”

People often wonder if a moment, a day, or even a week with a child is enough to make a difference in their lives. And Rey agrees, the heart of this work is to establish life-long relationships with these children, to walk alongside them and invest in their lives. However, his experience that day reminded him that it’s not about the amount of time you have with a child, it’s about being obedient with the moments you’re given.

“There’s an analogy I use where life is a book and God is the author. He’s the one writing the life stories of these kids and every once in awhile their life intersects with ours.  I had five minutes with that little girl, and with some of these kids I’ll have for a year, or five years, and some of them I’ll know for the next twenty years. As someone who believes in God and believes He’s called every single one of us to care for these kids, my responsibility is to do the best that I can during the time that I have with these kids. So, if I have one day, one lunch, just one chance with a kid, I’m going to pour my heart out in the time I have. I know God’s ultimately in control. He’s been writing their story long before I met them and He’s going to be writing the story long after I leave. I just want to do my part. I want Orphan Outreach to do our part.”

Are you wondering what part you could play in the life of a child? Orphan Outreach has countless opportunities for you to get involved and discover your own “why”. Click here to learn more.

back We Can't Do This Alone Our foundation is strong. The future is bright because God is still the author. next